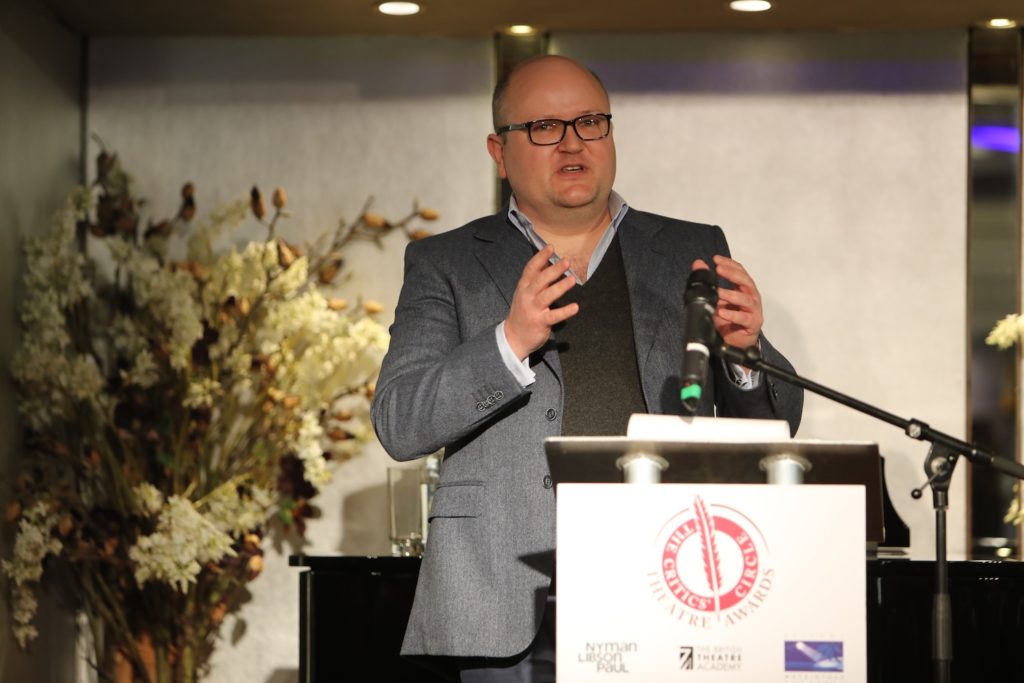 Criticism in flux: Chair Henry Hitchings on hosting this year’s Awards, then stepping down

Tomorrow, 11 February 2020, Henry Hitchings hosts his first and last Critics’ Circle Theatre Awards as chair of the Drama Section. He strikes notes of melancholy but also celebration as he looks ahead to the new generation of critics.

Recently I asked some friends to complete the sentence ‘Theatre critics are…’ Somehow stifling the urge to say ‘always wrong’, they responded in mostly unexpected terms: we are stealthy documentarists, reluctant tipsters, the arts world’s equivalent of John the Baptist, experts with the eagerness of amateurs, sceptics secretly hoping for miracles, a cheeringly archaic extravagance, the sort of folks who know the way but can’t drive the car, clumps of bias held together by the glue of erudition, and the sworn enemies of personal hygiene.

As chair of the Drama section of the Critics’ Circle, I feel obliged to defend my colleagues against the last of those charges. This annual ceremony is a welcome opportunity for us, as a group, to prove that we are more than merely (to quote A.A. Gill) ‘these creeping things… moribund, joyless, detached’ or indeed (to quote Robert Burns) ‘cut-throat bandits in the paths of fame’. To prove that we have souls – and that the theatre is where our souls have their most memorable adventures.

I find myself wondering if there has ever been a time, in the 107-year history of the Critics’ Circle, when we have not brooded about criticism being in flux

This year the annual baring of souls includes, for me, a note of melancholy. When I took over from Mark Shenton at the end of 2018, I expected to occupy this role for several years before passing the baton. But last summer I lost my position at the Evening Standard – along with my colleague Fiona Mountford, who had been in post for seventeen years. Our jobs were moved in-house, as part of a programme of cost-cutting. Our successors are good people, knowledgeable and passionate. Yet broader change is afoot.

In the autumn, Ann Treneman stepped down as chief theatre critic for The Times. Quentin Letts left the Daily Mail and became chief theatre critic for The Sunday Times, replacing Christopher Hart. Ian Shuttleworth brought to an end his relationship with the Financial Times, which dated back twenty-five years (twelve of those as joint chief critic). Matt Trueman resigned as UK critic for Variety after being hired to work as a creative associate at Sonia Friedman Productions.

Most notably, Michael Billington retired as chief theatre critic for the Guardian; attaching his name to our Best New Play award is a mark of our respect for his service there, which spanned forty-eight years and 10,000 reviews.

It’s tempting, if a touch portentous, to speak of a changing of the guard. But I find myself wondering if there has ever been a time, in the 107-year history of the Critics’ Circle, when we have not brooded about criticism being in flux. Given that we’re in celebratory mode today, it seems more apt to cheer the recent addition to the Drama section of no fewer than ten new members – and to salute them, since the future of writing about this most public and yet most personal of artforms is in their hands.