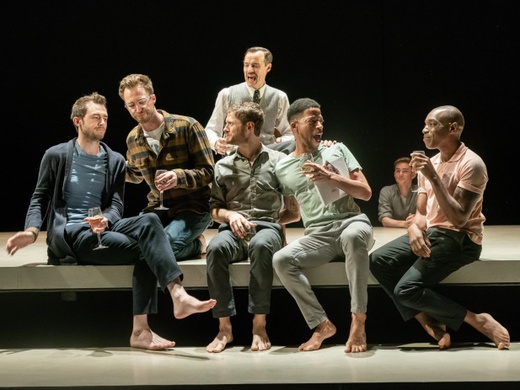 Headlines from the 2018 Awards include:

“Where other award ceremonies prioritise celebrity winners, see the industry rewarding itself or act as a public popularity contest, the Critics’ Circle Theatre Awards alone are above the fray with their independence, judged by respected critics whose job it is to see theatre week in, week out, without fear or favour, and who have no other agenda than to celebrate excellence. Critics are invited to reward their favourite contributions to creative excellence equally across plays and musicals.”

The Awards were presented in association with Nyman Libson Paul Chartered Accountants, leading entertainment industry specialists, and supported by Delfont Mackintosh Theatres and The British Theatre Academy, who also staged a sneak-peek performance of its upcoming production of Broadway musical Once on This Island.

To view 2018 Awards speeches from critics and winners, visit our Facebook page.

The cast of Company. © Brinkhoff Mogenberg

Kyle Soller in The Inheritance

The Jack Tinker Award for Most Promising Newcomer

Chris Walley in The Lieutenant of Inishmore