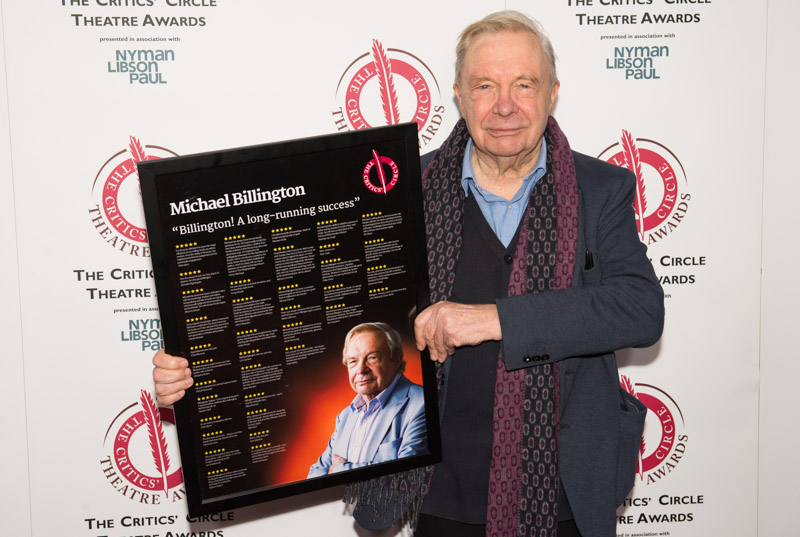 Honouring his nearly 50 years as the Guardian newspaper’s chief theatre critic, a role he stepped down from at the end of last year, the Critics’ Circle renamed the Best New Play Award in honour of former chair Michael Billington. And at this year’s ceremony, he was presented with a theatre poster of five-star “reviews” about his long-running success, written by fellow critics about the influence he has had on them and the profession.

The full collection is also published below, as well as a longer dedication by Michael Darvell here.

“For 30 years, Michael has been the major influence on my writing, books as well as reviews: I love the clarity of his prose, the experience behind his judgement and his passionate engagement. In our household, we have, over the years, usually gone to read his review first — to the point where we have created a nickname for him: Billy. So for years when a new show opened (that we hadn’t seen ourselves), we would ask: What does Billy say?” – Aleks Sierz

“He’s the wisest of owls, he’s the doyen of doyens, he’s the great Billington.” – Benedict Nightingale

“Michael has been the doyen of theatre critics with his knowledge of plays and writers. His lists and lists of works he has truly criticised with judgment and not just by personal taste. We will not see his like again.” – Blanche Marvin

“Encyclopedic knowledge, always measured. Michael’s contribution though has been immense. His books on Pinter will stand the test of time and forever make essential reading for the next generation of theatre aficionados.” – Carole Woddis

“Michael Billington was the one we all had to beat and very rarely did.” – Charles Spencer

“Michael Billington is one of the reasons I moved to London to pursue theatre criticism. Reading his pieces back in my little bedroom in Italy built the backbone of my dream and made me fall deeper in love with theatre. His retirement is a loss for our field, but he remains a beacon of knowledge and a career to envy.” – Cindy Marcolina

“Of all the theatre people I have ever met, Michael is the one I am proudest to know and to call my friend. I was a huge fan long before I met him as a baby critic in 1987. And I was sitting in the stalls for many years before I was brave enough to speak to him. Then we became great friends – to me, my husband and my children, all of whom love him.

“He once said to me that the key to being a good critic was not falling asleep which meant, he said, developing the skill for taking a nap in the afternoon. Much more important, he also taught me the very valuable lesson that any good production must include someone on the stage with whom one must want to go to bed. He is, in my opinion, absolutely right. I never fail to apply it! – Georgina Brown

“He set a standard we can but hope to match.” – Gerald Berkowitz

“Billingtonia: brilliant – both original and part of a grand tradition, intellectually challenging and fizzing with wit…

Michael Billington’s writing represents the gold standard for a generation of critics. His encyclopaedic knowledge, succinct, witty language and enduring love of theatre have been an inspiration to other reviewers, while his perception and generosity are valued by actors and directors. His books are both erudite and accessible, essential resources for critics and theatregoers alike. On a personal level, he is always friendly and unstuffy, never too grand to encourage beginners. Thank you, Michael!” – Heather Neill

“Michael has always been tremendously generous to me. He’s perennially excited by new ideas and perspectives, whether from theatre-makers or from those of us who write about their work. I’m inspired by his unflagging enthusiasm for the importance of theatre, but he can also be counted on for inside stories about cricket, football and politics, which he relays with as much pleasure as his take on the latest Ibsen revival or Tom Stoppard play.” – Henry Hitchings

“The first voice we turn to… Always out of the theatre first and way ahead of the rest.” – Howard Loxton

“Wide-ranging, constantly engaged and engaging… The most thoughtful and articulate journalistic critic in Britain if not the English-speaking world.” – Ian Shuttleworth

“He saw what was and what should be; and he found the right words.” – Irving Wardle

“I’ve always admired Michael’s ability to be completely inscrutable in the stalls. His tastes are broad, and his love of Ken Dodd as intense as his love of Shakespeare. He’s never afraid to call out bad work. But equally he takes little pleasure in writing a damning review.” – Jane Edwardes

“As a theatre-mad teenager, I grew up reading Michael Billington. I knew that his empathy, wisdom and humanity shone through in his writing. But I never knew I’d get to discover that the man himself embodies all those things in person, and then some.

“Despite his lofty position, Michael has always taken an acute interest in the writing and wellbeing of younger writers. His kindness and intellectual support when I found myself in the middle of the Cumberbatch-Hamlet debacle meant the world and rebuilt my confidence. He’s not just The Learned Critic – he’s funny. Every time I run into him at the theatre, I know that particular evening is going to be more fun because he’s there.

“Michael, readers will be the poorer without your sensitivity, your deft turn of phrase and your incomparable cultural memory. (And thank you for continuously affirming by example that cultural memory matters – it matters so very much.) But we gaggle of theatre writers will be much the poorer without your guidance and generosity in post. Don’t disappear from press nights, please. Here’s to seeing you around.” – Kate Maltby

“It’s an honour to disagree with him.” – Kate Wyver

“One of the last of the overnight heroes; faster up the aisle than many half his age, brain whirring with elegant lines and sharp ideas.” – Libby Purves

“Michael Billington: the one and only.” – Lyn Gardner

“One of the very best qualities for a person as well as a critic is kindness — and Michael Billington exemplifies it in his life as well as his writing. He also has insatiable curiosity and a fantastic depth of knowledge, which make him one of the best critics we’ve ever had.” – Mark Shenton

“Billington! A long-running success – and a must for all theatre fans.” – Mary Brennan

“Wise, generous-hearted – and, for nearly 50 years on the job, always able to stay awake in the dark: truly your like, Michael, shall not be seen again.” – Matt Wolf

“Many thanks, Michael, for your breadth of knowledge, depth of insight and generosity of spirit!” – Michael Arditti

“Good theatre critics have to be able to write well. Equally, they have to have seen a lot, be curious and recognise the future, or some version of it. All criticism is subjective. Good criticism is informed subjectivity. Michael is the last man standing in these and many other regards. And, as David Hare said, no critic who has Harold Pinter and Ken Dodd as his divided lodestar can be all bad.” – Michael Coveney

“There was always someone who knew more, and had seen more. Billington kept us honest.” – Miriam Gillinson

“The news of Michael Billington’s retirement comes as a sadness and a shock, for even at the age of almost 80, his reviews have retained their persuasive power and fluency. No British newspaper drama critic has reacted so easily to theatre’s habit of change, and on virtually all occasions, responded receptively to the shock of the worthwhile new.

He has written eloquently with a stronger, more influential, left-of-centre perspective than any other critic since Kenneth Tynan. No one else has so valuably insisted upon theatre’s important role in relating the private and the public.

Working alongside Michael and then at a greater distance, I was struck again and again by his rare, terrific ability to write against the pressure of the demanding clock. Michael had the ability to distill the essence of a play and his reaction to it with a fine, neat clarity. A Billington review was always notable for its succinct analysis and assessment of a play, new or antique, a sense of its atmospherics and a vivid word-picture of an important performance. He will have a major place in the history of British theatre criticism.” – Nicholas de Jongh

“Michael Billington excelled for half a century by combining experience, expertise, enthusiasm and reliable judgement with great modesty. As a result, whenever I want an opinion about a play, he is my first port of call.” – Philip Fisher

“To quote his adored Ken Dodd, I’m deeply discumknockerated that Michael is going after such a terrific, tattifilarious innings.” – Robert Gore-Langton

“Michael Billington’s reviews will be essential reading for future historians who want to know what theatre was like in the late 20th/early 21st centuries.” – Robert Tanitch

“An inspiration and an example. How wonderful it has been to read and follow Michael throughout his entire reviewing career.” – Sarah Crompton

“Michael has been an inspiration to so many of us for his great wit, wisdom and abiding love for the art-form. And a lovely, generous man to boot.” – Sarah Hemming

“The critic who has enriched the theatre not merely with opinions but  with a humane world view – and is quoted everywhere, from Aberdeen to Ambridge.” – Susannah Clapp

“Words that come to mind when I think of Michael Billington: integrity, insight, enthusiasm, kindness. It’s hard to imagine the Theatreland without him; I don’t want to.” – Terri Paddock

“Michael’s writing was my first encounter with theatre criticism, and it’s been a privilege that the revered legend has since become a revered colleague: unfailingly kind, and always ready with a cheery word at press nights.” – Tim Bano

“National publication critics often tend to concentrate on the big theatre events, Michael could be found out on the fringe at all sorts of new and old plays. He was Mr Finborough for me.” – William Russell